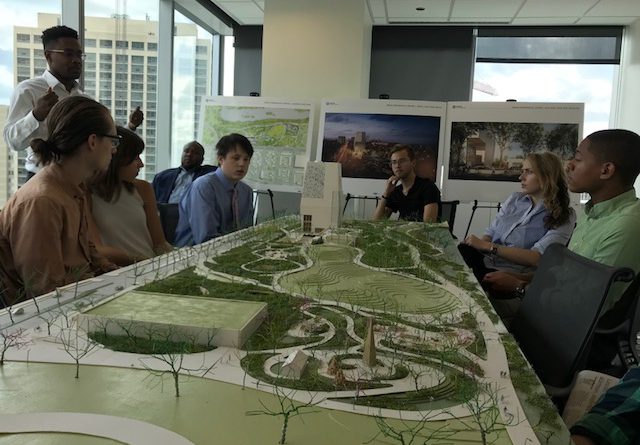 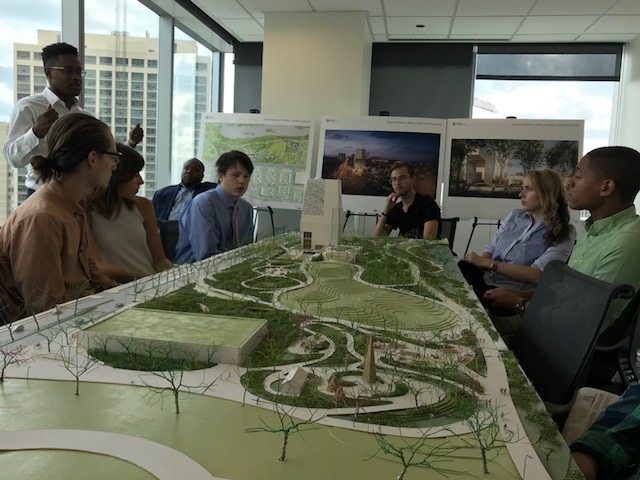 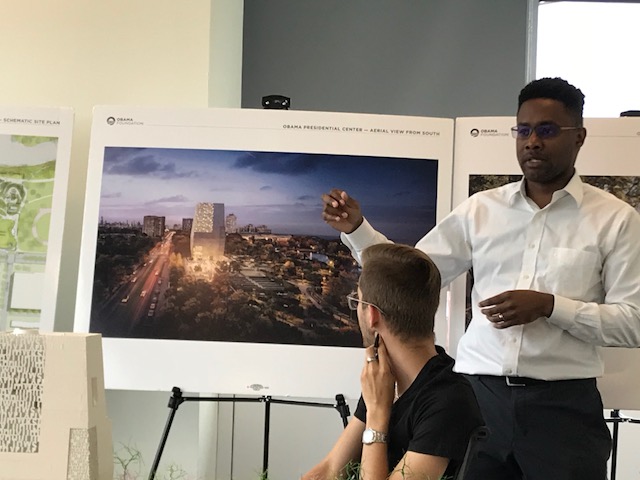 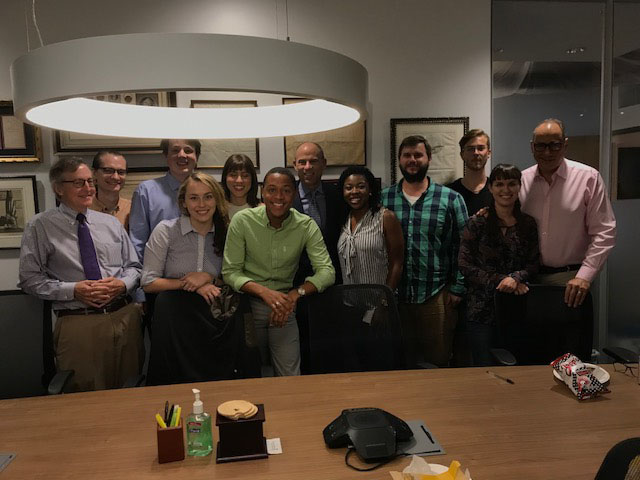 The nine Northwestern University MSJ students from the Medill School of Journalism, Media, Integrated Marketing Communications met in Hyde Park at the Obama Foundation, a nonprofit dedicated to civic engagement.

They were hosted by Chris Brooks, senior project manager, and Cory Thames, deputy director for community engagement, on the Foundation team planning the design and creation of the Obama Presidential Center to rise in Jackson Park on Chicago’s South Side.

Brooks said that the Foundation wants one of the guiding principles of the Center to be engaging the public and getting visitors inspired by the story of the Obamas–and what can be accomplished by individuals when they are focused on progress and change.

“How can we use the story of the Obamas to get people to look within themselves and find change, growth and their own stories, as part of this project?” Brooks asked in conversation with the students. “You start with a guiding principle.”

Lucas Robinson, a Medill MSJ student in the group, said later that he especially enjoyed the conversation. “Visiting the Obama Foundation was quite a profound experience,” he observed. “I think everyone in the cohort really enjoyed it.”

At the Obama Foundation, students sat around a large model of the Obama Center while Brooks briefed them on plans and took questions about the vision, design and ongoing work with the residents of the surrounding communities.

Brooks recounted that on a visit to the 11th floor offices earlier this year, Obama looked northward and said he could see his old apartment in the neighborhood where he lived as a community organizer. That work with the community continues in a new way these days, the students heard.

“We need to engage the community,” Brooks explained, noting the foundation solicited advice in comment cards and received an array of praise, suggestions and feedback from the community, as well as some pushback at times. Even that is welcome, he added, because the foundation wants the Chicago community to “feel public engagement, citizenship and the power of the public voice to affect the design and the project.”

He added that the foundation is looking to engage local schools for educational synergies; to make diversity and inclusion a priority in hiring, local jobs and job training; and to drive investment that benefits the community.

The foundation is also working with the Chicago Park District and local parks councils to ensure the site in Jackson Park maintains the green space envisioned for the area and to shape the site in ways to feel like parkland compatible with Chicago’s lakefront.

Students were encouraged to return to the neighborhood around Hyde Park to attend community group meetings, talk to local residents and get a sense of how neighbors feel about their interactions so far with the foundation and the team planning the Obama Presidential Center.