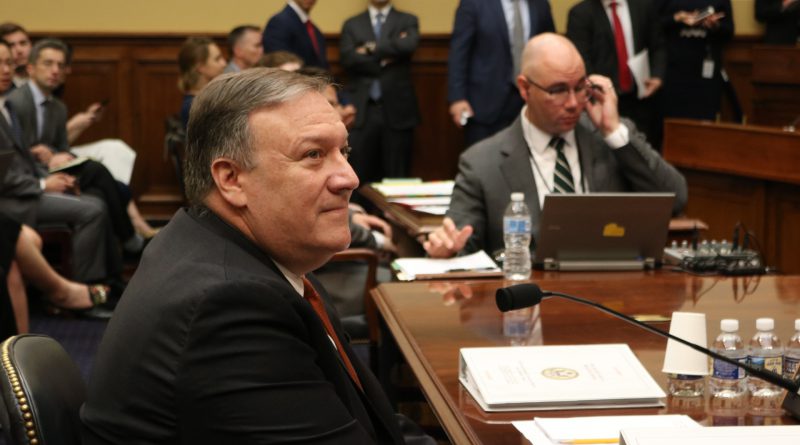 Secretary of State Mike Pompeo during his Southeast Asia tour in August pledged to provide nearly $300 million in new security funding for the Indo-Pacific region in a meeting with ASEAN leaders.

The offer during the ASEAN meeting came days after Pompeo had announced a separate $113 million infrastructure fund for Asia-Pacific economies as a part of President Trump’s Indo-Pacific strategy.

“Any sort of U.S. assistance program right now is sort of trying to show signs that U.S. is staying engaged as China becomes more influential in the region,” said Joshua Kurlantzick, a senior fellow for Southeast Asia at the Council on Foreign Relations.

While there is no explicit mention that these measures are to counter China’s rising power, it’s difficult to divorce U.S. strategy in the Indo-Pacific from China’s growing presence in the region.

“In the National Security Strategy China is listed as a strategic competitor and U.S. leaders have said we’re willing to cooperate where we can, and we will confront where we must – the spending is part of that strategy and should be understood in that context,” said Michael Mazza, visiting fellow in foreign and defense policy studies at the American Enterprise Institute.

However in a larger context, the director of the China studies program at the Johns Hopkins University School of Advanced International Studies (SAIS), Andrew Mertha, argues the miniscule amount of foreign aid Pompeo is offering is a huge step back from commitments made by the previous administration.

“The fact that Pompeo was only given $300 million to play with sends a loud and clear message that Washington is reversing the pivot of the Obama Administration, thus allowing China to fill the vacuum,” Mertha said.

China continues to spend billions of dollars on its One Belt One Road Initiative (BRI) across Asia. It is a massive state-backed trade and infrastructure project to physically and financially connect dozens of economies. With many developing countries in Southeast Asia needing foreign investment to develop infrastructure, China has taken advantage of those opportunities to expand dominance in the region.

“In Southeast Asia, there’s a desperate need for infrastructure investment and that raises questions such as are they attaching strings to these projects that are not so easy see but are leading these countries to increasingly side with China in international disputes?” said Mazza. “So yes, this (the BRI) is a concerning initiative.”

For example in the case of Sri Lanka, Beijing consistently provided loans and assistance through its stated-owned enterprise, the China Harbor Engineering Company, to help fund building a port in Hambantota. In 2015, when Sri Lanka president Mahinda Rajapaksa was voted out of office, the new government struggled to pay back the accumulated debts. Eventually after months of negotiations with the Chinese, the Sri Lankan government agreed to pass over the port for a 99-year lease along with 15,000 acres of land around the port.

Two and a half thousand miles from Sri Lanka, the East African country of Djibouti now faces a similar situation where the country faces up to $8 billion worth of debt to the Chinese. What is noteworthy is that China has developed a military base on Djibouti just 6 miles from the U.S. military base in Africa. Mazza says it will not be a surprise if Djibouti faces a similar outcome as Hambantota, raising concerns for the U.S. military.

“We’re expecting to see a lot more of what has happened in Sri Lanka to other countries going forward,” said Mazza.

China’s growing role in the region’s economies also comes at a time it is expanding its military presence in the South China Sea. Kurlantzick says it’s the biggest area the U.S. is trying to maintain a balance against China through its spending commitments in the Indo-Pacific.

“In the case of maritime security, the most obvious area is the South China Sea where the U.S. is involved in that it has been sort of a protector of security for those (Southeast Asian) countries and for freedom of navigation in the South China Sea,” said Kurlantzick.

According to Mazza, the U.S. already undoubtedly has extensive influence in the Indo-Pacific including being long-time treaty allies with the Philippines and having a security partnership and a Free Trade Agreement with Singapore. Thus the U.S. strategy in the region is to “maintain the existing influence” and keep China in check to ensure “its influence does not harm U.S. interests,” which according to Mazza include China creating exclusive trading partnerships and Southeast Asian countries emulating China’s authoritarian model for government.

With the meager financial commitments Pompeo has offered, those national interests may be at stake. Mertha says the U.S. will not even be able to maintain the status quo in the Indo-Pacific.

“If the U.S. is worried about losing strategic partners in the region, there is no better way to ensure such an outcome than by demonstrating such global fecklessness as they are doing now,” Mertha said.