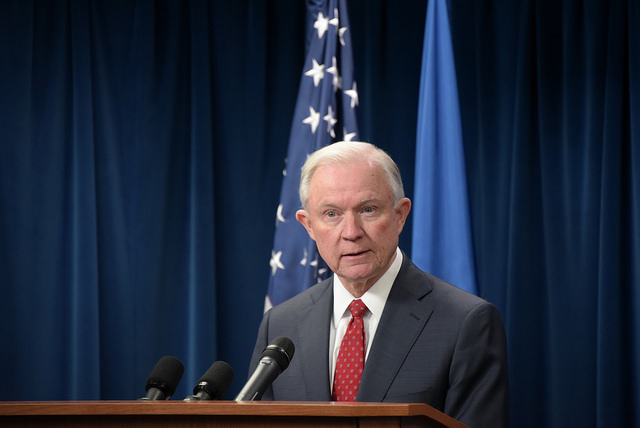 Following the Justice Department’s seizure of a reporter’s phone and email communications without prior notice, The National Press Club, PEN America and more than a dozen other leading organizations representing professional journalists and free speech advocates are demanding an explanation from Attorney General Jeff Sessions.

‘This intrusion is particularly troubling because it relates to reporting concerning alleged misdeeds by the president’s campaign, raising questions about whether the content of the reporting is what occasioned this unusual level of scrutiny,’ the groups write in a letter sent Friday to Sessions. ‘Moreover, we share a concern that this will have a chilling effect on other journalists who now know that records of their calls, emails and texts may be reviewed without their knowledge, perhaps months and years after the fact.’

The press and free speech advocates are asking the Justice Department to provide an explanation as to how this action strikes ‘the proper balance between law enforcement and free press interests,’ in the words of the Department’s own formal guidance for handling investigations involving the news media.

‘We must view this troubling incident in the context of the Trump administration’s daily attacks on the role of the press in preserving our fundamental freedoms and values,’ said PEN America Chief Executive Officer Suzanne Nossel. ‘That there has been no clarity from the Justice Department on other avenues of investigation pursued before Watkins’ records were seized, a move their own guidelines describe as a last resort, will inevitably have a chilling effect on journalists covering the Administration. An explanation for this course of action is crucial to the exercise of press freedom.’

Last week, the New York Times reported that, as part of an investigation of alleged improper leaks of information by a congressional staffer, the Justice Department swept up years’ worth of communications to and from Times reporter Ali Watkins without giving her prior notice. The seizure covered years during which Watkins worked for other news publications, the Times reported, and dated back to her years in college. Watkins has not been accused of any violations of law.

Noting that the Justice Department met recently with a ‘News Media Dialogue Group’ of editors and executives of major news organizations created in response to an earlier seizure of a reporter’s communications, the letter asks Sessions to uphold commitments made in the Justice Department’s 2015 guidance that resulted from those conversations.

The department is two years behind in publishing promised annual reports describing instances in which it applied the media guidelines to obtain records from, or records of members of the news media, the letter-writers remind Sessions.

The letter urges the attorney general to release those reports and invites him to join media representatives and free speech advocates in an effort to balance the needs of law enforcement with the public’s right to know. ‘The National Press Club will make its podium available to you should you want to explain the Department’s actions in public and answer questions from the press,’ the letter says.

‘As a society that depends on the free flow of information — including information from whistleblowers — we need mechanisms in place to ensure that technology is used to enhance democracy not sabotage it,’ said Barbara Cochran, president of the National Press Club’s Journalism Institute.

Founded in 1908, the National Press Club has more than 3,100 members worldwide representing nearly every major news organization. Through its nonprofit Journalism Institute, it provides professional training for reporters and communicators and advocates for press freedom worldwide.

PEN America stands at the intersection of literature and human rights to protect open expression in the United States and worldwide. We champion the freedom to write, recognizing the power of the word to transform the world. Our mission is to unite writers and their allies to celebrate creative expression and defend the liberties that make it possible.”