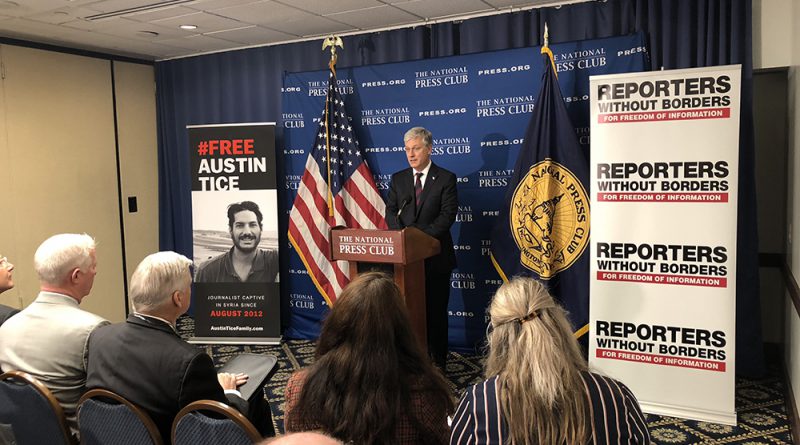 WASHINGTON—Austin Tice is believed to still be alive more than six years after being kidnapped in Syria, according to U.S. Special Presidential Envoy for Hostage Affairs Richard O’Brien.

O’Brien would not give specifics while speaking at the National Press Club Tuesday, but repeated that the U.S. government believes that Tice is alive.

Tice, a journalist and former Marine, was kidnapped in August 2012. Following Tice’s abduction, a video with the headline “Austin Tice is alive” appeared. O’Brien would not comment when asked about whether proof that Tice is alive has been received since the video’s release.

O’Brien pointed out Russia’s “tremendous influence in Syria” and welcomed any Russian support in finding Tice. He added that any country desiring better relations with America must return any American citizens it is holding. Currently, almost 20 American citizens remain detained abroad.

“We are not going to be terrorized,” said O’Brien. “We will not be intimidated.”

Tice’s father, Marc, thanked O’Brien and those who have continued to support Austin since his kidnapping, especially the organizations for which Tice reported, including the McClatchy Network and the Washington Post.

To support Tice’s safe return, the National Press Club announced plans for a fundraiser on May 2.

In April 2017, the FBI issued a $1 million reward for anyone with information leading to the safe return of Tice.

NPC President Andrea Edney said Tuesday that the NPC’s goal is to match the bureau’s investment. Together with Reporters Without Borders, the NPC will sponsor a “Night Out for Austin Tice,” a collaboration of local Washington restaurants to donate 50 percent of all revenue from dinner on May 2, the eve of World Press Freedom Day. Both restaurants housed in the National Press Club will participate.