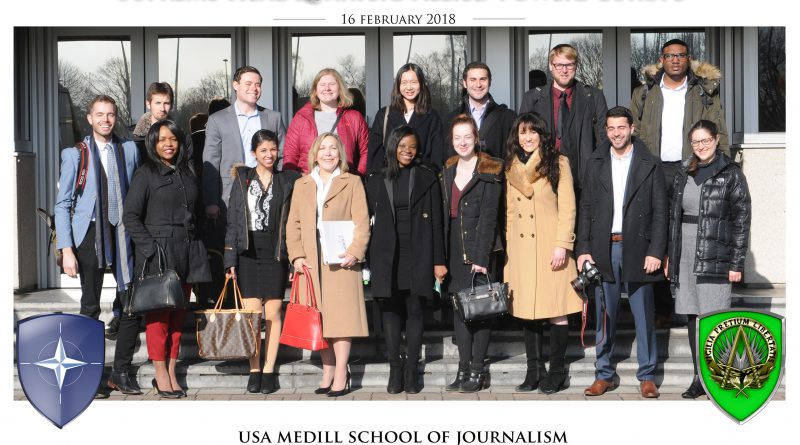 WASHINGTON – During briefings for Northwestern University’s Medill School of Journalism at the North Atlantic Treaty Organization’s military headquarters in Belgium, three NATO officials Friday discussed the challenges facing NATO and the important role the organization plays not just for allied countries, but for countries all around the world.

Here are the three biggest takeaways:

NATO Desk Officer Mark Finneron explained that one of the challenges NATO allies have to work through is the difference between domestic issues pertaining to one country and issues that are appropriate for NATO to deal with.

Finneron said that sometimes there are domestic issues that encompass multiple allies that can be addressed by NATO if the allied countries decide.

An example of an issue affecting multiple NATO allies is the large influx of refugees to their countries due to revolutions and wars that have spread across the Middle East throughout the last 10 or more years.

However, despite this issue affecting multiple allied countries, a senior NATO official said the ongoing refugee crisis would not be considered a situation where NATO would get involved or on which it would focus.

2. Despite the U.S.’s overwhelming position of strength, NATO officials said the America has used its power responsibly.

A senior NATO official credited the United States for not abusing its power over other NATO ally countries, because of its values in democracy.

Even if every NATO country contributed the required 2 percent of their gross domestic products to finance the NATO defense budget, the senior official explained, the U.S would still overwhelmingly be the largest contributor.

NATO’s rules of a consensus vote have helped with the overall balance of power between the 29 NATO countries. However, despite the fact that the United States has the strongest military power among the member countries, it has continued to work with countries and has not been a bully when priorities are trying to be set.

The senior official did add that when the U.S. speaks, the other member countries have to take serious considerations of all United States’ opinions on issues the organization examines.

NATO sees the United States’ as a “mature player” regarding its special role in the institute, he added, and that role has stayed unchanged regardless of the transition from the Obama administration to the Trump administration, except a concern, based on criticisms from President Donald Trump, that NATO is having in increasing pressure on countries’ contribution to the NATO defense budget.

He pointed out that the overall increase in the United States’ military spending has not solely benefited NATO because the investment in military power is not always relevant to NATO’s interests, giving the example that the United States’ recent focus on defense building in the Asia-Pacific region is not directly helping NATO.

3. NATO’s organization is changing as threats to NATO change as well.

“After the Berlin War fell, we thought world conflict would get better. But the world got more chaotic,” said Lt. Col. Claus Richter of NATO’s communications division.

A senior NATO official later explained that historically, there has always been a “phase 1” and a “phase 2” of war and the difference between a country at peace and a country at war was clear. Today, however, there is no clear distinction and countries remain at a permanent “phase 0.”

Countries are constantly under attack and often do not even know what qualifies as an attack because of the increase of cyber warfare and the anonymity of the attacker.

NATO has traditionally been comprised of three domains: land, air, and sea. Because of the increase in cyber threats, it has recently created a fourth domain that specifically focuses on cyber defense systems and NATO is working on integrating cyber divisions more directly into their traditional domains of operation.