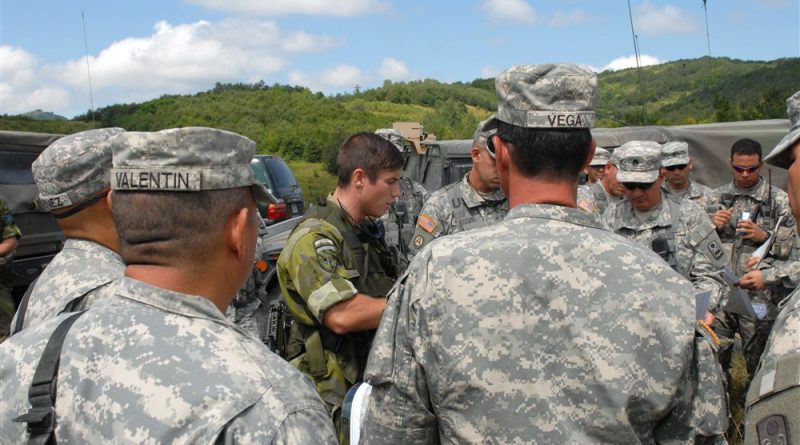 But that is where we were, learning not only about EUCOM’s birth, but about the history of its current Stuttgart headquarters at Patch Barracks – a former Nazi army base-turned-U.S. Army base before becoming EUCOM headquarters following de Gaulle’s ouster from France – and the command’s trajectory since its beginnings prior to the Cold War, through today, when it’s faced with an unpredictable Russia attempting to exert influence in Eastern Europe.

Highlights from Monday included briefings by several EUCOM officials, who discussed the command’s five-part defense plan and the challenges it brings. It’s difficult – impossible, actually – to predict years in advance how many troops you’ll need and the threats they’ll have to deter. But that’s what the EUCOM generals and political advisers working under the leadership of Commander Gen. C.M. Scaparrotti (who also serves as the Supreme Allied commander of NATO’s European operation) must do.

The 2014 Russian annexation of Crimea, for example, was a surprise, said one official. Now, four years later, with about 52,000 American military troops under EUCOM’s jurisdiction – a decrease from the more than 360,000 troops that carried out command duties during the Cold War – it’s unclear whether resources are sufficient to deal with simmering East-West relations.

Officials also discussed EUCOM’s press and social media strategy – challenged in an age of cyberwarfare and foreign-sponsored misinformation – as well as shifting and colliding global perspectives on gender equality and the treatment of women in foreign countries.

It was the first day of a packed week that culminated back at a military headquarters Friday, when the team visited Scaparrotti’s other digs at Supreme Headquarters Allied Powers Europe – aka SHAPE – in Mons, Belgium.