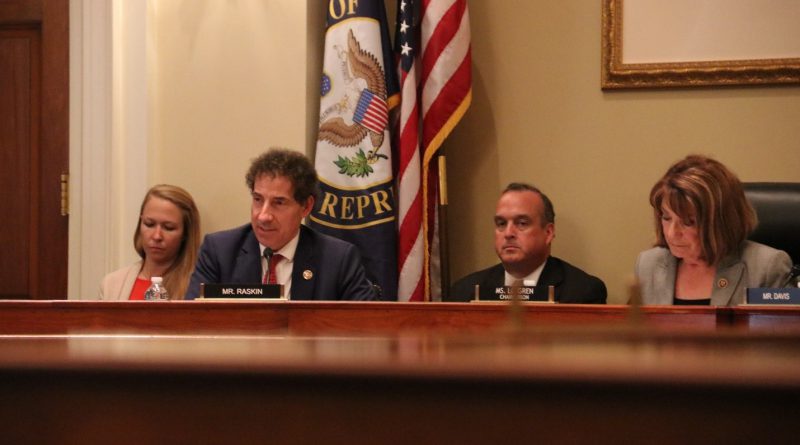 Maryland Rep. Jamie Raskin, the vice chairperson of the Committee on House Administration, asked election experts whether U.S. states and localities are up-to-date on security best practices in preparation for the 2020 elections. (Dwight A. Weingarten/Medill)
Cybersecurity Domestic Politics
By Dwight A. Weingarten on September 28, 2019 2020 election, Congress, Maryland, security
Tweet

WASHINGTON—Congress met Wednesday to discuss the security of the 2020 election, and while many other states are looking to catch up, Maryland’s election systems already meet best practices.

Larry Norden, deputy director of the Democracy Program at the Brennan Center for Justice at New York University School of Law, told the House Administration Committee on Wednesday that local officials in 31 states said they needed to replace their equipment before the next election.

“The good news is, I think, that there is a good deal of expert consensus as to what needs to be done to better secure our elections,” said Maryland Democratic Rep. Jamie Raskin, vice chairperson of the committee.

Maryland uses a paper-based voting system, which Norden and other experts told the committee that paperless machines, which are used as the primary voting method in 10 states, should be banned because they do not provide a paper record for auditing.

Several members of the committee stressed the importance of conducting post-election audits. Tracey Hartman, director of special projects at the Maryland State Board of Elections, said in a telephone interview that the state conducts two post-election audits to ensure the accuracy of election results.

There were no differences in votes cast in the 2018 comparison of the election night vote count and the audit, Hartman said.

Marc Welch, an election administrative assistant in Frederick County, participated in the 2018 audit.

Maryland was not one of those 40 states identified by Norden whose election officials said at least some of their equipment was over a decade old.

“It’s seems as if the cyber age has made political democracy more vulnerable and our elections more susceptible,” Raskin said.
He said Congress must continue to help states keep up with new cybersecurity threats.

“Congress should be really in the forefront of trying to assist the states in making sure we’re fortifying our defenses so there is not an open door for the kind of activism we saw in 2016,” Raskin said, referring to Russian interference in the 2016 election, especially disinformation on social media platforms and cyberhacking.