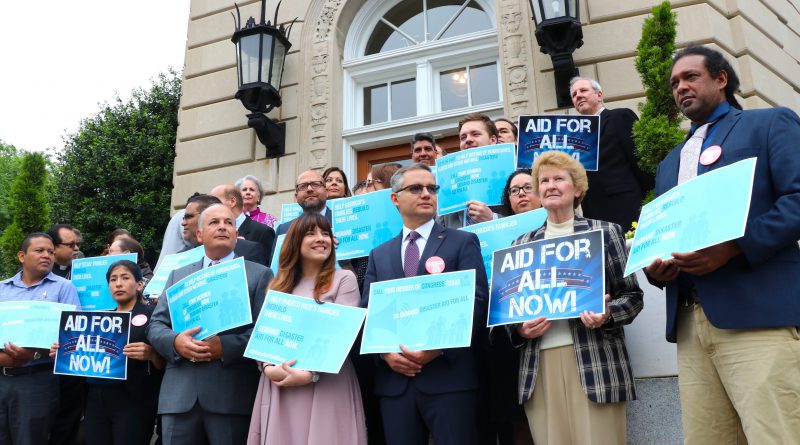 WASHINGTON — Senate Republicans need to follow through on a new proposal to provide comprehensive disaster relief for Puerto Rico, leaders of the Hispanic Federation and other Puerto Rican activists said Wednesday before heading to Capitol Hill to spread the message.

“Puerto Rico is in dire need, urgent need, not only for food security, but for infrastructure and access to safe, sanitary housing so that it’s ready for the next disaster,” said Ataveyra Medina Hernández, a spokeswoman for Caño Martín Peña, a historic settlement and waterway winding through San Juan that continues to flood due to the lack of proper infrastructure. Floods have increased since the hurricane, and the neighborhood of 25,000 contends with contaminated water, improper sanitation systems and a public health crisis, Medina Hernández said.

According to FEMA, Federal Emergency Management Agency $11.2 billion has been spent on disaster relief in Puerto Rico since the hurricane, but many activists have called the aid inadequate.

The Senate failed to pass any further disaster relief for Puerto Rico or other states hit by recent extreme weather events before Congress departed for recess on April 1. Democrats rejected the Republican proposal on the grounds that it did not provide enough aid to Puerto Rico.

Sen. Rick Scott, R-Fla., said a new proposal was given to Democrats for consideration on Wednesday, but did not provide additional details.

Sen. Patrick Leahy, D-Vt., who received the new proposal from Senate Appropriations Committee Chairman Richard Shelby, said he needed to review the proposal to ensure it actually provided Puerto Ricans with at least $8.3 billion in promised Community Development Block Grants from the Department of Housing and Urban Development, according to press secretary Jay Tilton.

“HUD has denied the island access to all but 7 percent of that funding,” Tilton said. “If the Republican proposal provides new funding to Puerto Rico, we need to make sure the island will actually receive it.  Given this unfortunate history and the Trump administration’s treatment of Puerto Rico, Committee Democrats are carefully reviewing this proposal.”

As the advocates marched to Capitol Hill, many said that Congress had failed the families impacted by hurricanes. “It’s incomprehensible that these devastated communities are still waiting on Congress,” said Laura Esquivel, national advocacy director for the Hispanic Federation.

In the meantime, Caño Martín Peña remains severely clogged and needs to be dredged to prevent continued flooding. Corporación ENLACE, an organization led by residents of Caño Martín Peña, has called on Congress to add a supplemental fund of $100 million to the disaster relief bill to dredge the channel.

The Rev. David Beckmann, president of Bread for the World, urged Congress to also include $600 million to continue a nutrition assistance program in Puerto Rico that expired in March. “Congress must not withhold this much-needed assistance from our fellow Americans any longer,” Beckmann said.

Because Puerto Rican citizens live in a territory of the U.S., they do not have a representative with voting power in Congress. A federal oversight board also maintains the authority to negotiate the island’s $74 billion debt.

Erica Gonzalez, director of the Power 4 Puerto Rico coalition, an organization fighting for the rights of Puerto Ricans in Washington, said the hurricane’s devastation comes on top the island’s $74 billion debt crisis.

“With a 58 percent poverty rate for children in Puerto Rico and a debt crisis that has tied the island’s hands,” she said, “Puerto Rico needs a disaster aid package that fully meets its direct needs.”