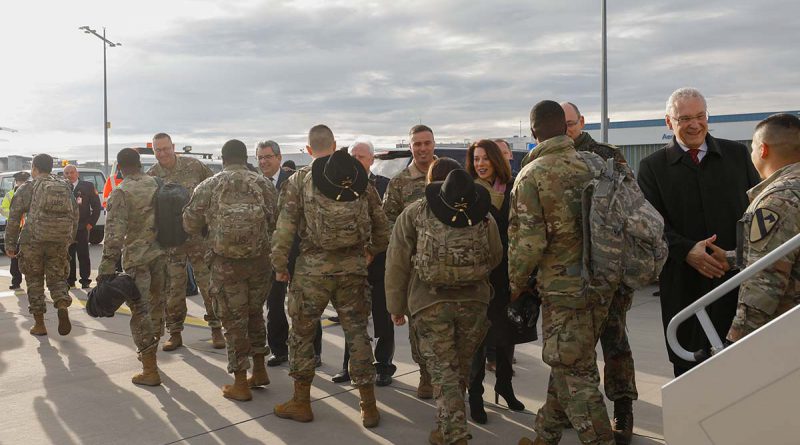 WASHINGTON—The Army’s decision to modify modifying the “scope and size” of one of the most anticipated multinational defense exercises of the decade – Defender Europe 20 – because of the novel coronavirus was the right decision because European countries are battling the virus and U.S. troops could both have been exposed and been carriers, the former commander of U.S. Army Europe says.

The military said Defender was to be the largest deployment of U.S.-based forces to Europe for an exercise in over 25 years. Approximately 20,000 service members were scheduled to travel from the U.S. to 15 European countries and train with their NATO counterparts. Almost 6,000 soldiers and a large number of vehicles and equipment had already moved into Europe since January for the exercise, slated for April and May.

However, in response to the coronavirus pandemic, U.S. Army Europe cancelled a host of exercises linked to Defender Europe 20 and redeployed troops back to the United States.

Lt. Gen. Ben Hodges, who commanded U.S. Army Europe from 2014 to 2017 and now is the Pershing Chair in Strategic Studies at the Center for European Policy Analysis, said the European countries that were set to host and participate in the exercise are focused completely on “looking after their own population and preventing the spread.”

Hodges also emphasized that host nation support was “a critical part” of the multinational exercise because Defender required moving a large number of troops and equipment across country lines in Europe. However, as COVID-19 makes its way around the continent, the “strict controls” on cross border movement implemented by these nations, including Germany, Poland and the Baltic States, would have made it difficult to conduct the exercise.

U.S. Army Europe spokesman Col. Joe Scrocca said part of the alliance was to “be flexible and responsive to host nations” decisions. “We want to make sure we protect our Soldiers, while also ensuring they are not vectors for the virus throughout the theater,” Scrocca said. He was, however, confident that the objectives of Defender-20 could still be met “despite a reduced footprint for the exercise”.

WHAT IS DEFENDER EUROPE 20

Defender-Europe 20 was going to be the third-largest troop and equipment deployment by the U.S. since the Cold War. The exercise was slated to be conducted from April to May 2020. The aim of the exercise, according to the U.S. Army, was “to operationalize the National Defense Strategy, which asserts Russia and China as near-peer adversaries.”

Europe was supposed to kick off a new “Defender series of exercises,” to be conducted in Europe and the Pacific in alternate years, to rehearse large movements to both regions.

The Army aims to “increase strategic readiness and interoperability” by enhancing its ability to move a division size, combat-credible force and equipment from the U.S. to Europe in a coordinated effort with its NATO allies, in the face of a potential crisis, according to the Army.

Along with making a statement to the adversaries in the region, Defender-Europe 20 also sought to further strengthen U.S. commitment to its NATO allies.

“Conducting tough, realistic training alongside our allies and partners in Europe enhances those professional relationships that build trust and confidence in each other and increases our overall interoperability, readiness and the ability to collectively deter potential threats,” Lt. Gen. Christopher Cavoli, commander of U.S. Army Europe, said.

At a time when the world is scrambling to deal with the coronavirus, Secretary of State Mike Pompeo said Friday that Russia, China and Iran are attempting to spread disinformation against the U.S.

In this deluge of disinformation, attempts have also been made to target the Defender Europe 20 exercise. While some stories are accusing U.S. and NATO forces of spreading coronavirus across Europe because of going through with the exercise, others are “mocking” the U.S. for scaling down amid fears of COVID-19.

Digital Forensic Research Lab, an initiative to combat disinformation by the think tank Atlantic Council, reported that anti-NATO activists “claim NATO troops will spread COVID-19” because of their participation in Defender 20, the latest in a series of attempts aimed towards stopping multinational exercise.

On the flip side, pro-Kremlin media is ridiculing the U.S. for not taking the risk of seeing the exercise through because of the coronavirus. Peter Apps, a global commentator and columnist at Reuters, wrote that “the most-read story on Russia Today” last weekend was one about the scaling down of Defender 20.  The article mocked the U.S. for being “unwilling to risk infection to demonstrate its commitment to the continent,” Apps wrote.

“Not only could it be something attributed to the U.S… but it could be attributed to any of the 18 nations that are participating, and therefore have an impact on their populations in their countries,” Jarrard, said in an interview last month. “The risk here is the scale that the misinformation could include with respect to all of our partners and allies that are participating in this event.”

The U.S. Army Europe already has a team, called the “Mis/Dis Tiger Team,” to fight disinformation in the region by tracking stories that could be pushing propaganda or disinformation to disparage and otherwise hurt U.S. Army operations in Europe.

Senior officials at Wiesbaden, Germany said they aren’t worried about the impact in the U.S. of the disinformation targeted at Defender 20 but are concerned about its impact within Europe, particularly in the Eastern, Baltic states.

“Most of the mis and disinformation that we encounter here in Europe is focused on the Russian language,” Scrocca said, and attempts to influence people in areas with large Russian-speaking populations to influence who “might sit on the fence as to what our purpose is.”

“Most of the Western Europe… the NATO countries, as well as folks back home, understand the true purpose of U.S. Army Europe here, as the exercise being defensive in nature,” Scrocca said. “We are more worried about it (misinformation) reaching folks that are not as well informed as U.S. citizens or Western Europeans.”

“The Information environment is not contained to one specific country. What’s put out by one country can easily be shared and another,” he said. “All we can do is continue to put out truthful, transparent information in great volume so that we can set that record straight from the start.”