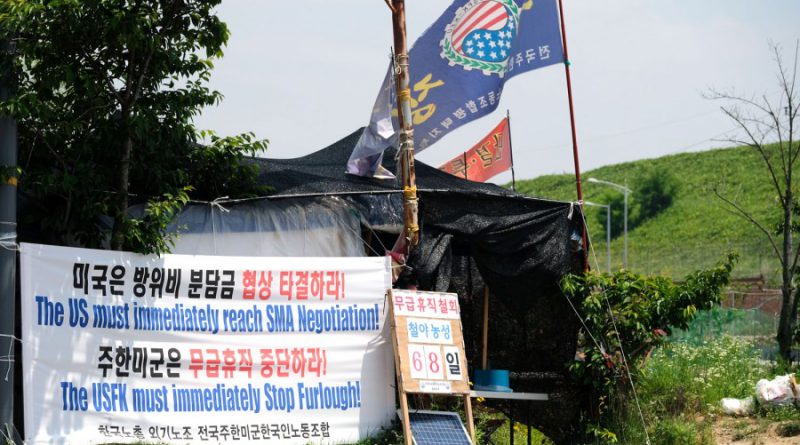 SEOUL – United States Forces Korea’s failure to notify approximately 9,000 South Korean employees at the end of January as legally required if they may be facing furloughs may signal that a new defense cost-sharing deal is underway between the Biden administration and South Korea, a U.S. Naval War College expert says.

The USFK is required by U.S. law to provide notice 60 days in advance of the start of any potential unpaid leave. Last year, the U.S. military issued a notice to South Korean employees and sent a press release on Jan. 28, two months before an administrative furlough began in April.

The furloughs were the result of a dispute over the defense cost-sharing agreement that began more than two years ago when then-President Donald Trump demanded South Korea sharply increase its payments to defray the cost of basing American forces in the Korean peninsula.

“Alliance relations under (President Joe) Biden will likely be conducted in a far less transactional manner with recognition of the value of the … alliance, not only for security but also as an important political and economic partnership,” said Terence Roehrig, professor at the Naval War College with research focuses on Korean and East Asian security issues.

The first round of negotiations under the Biden administration was held virtually on Feb. 5. South Korea’s foreign ministry said in a statement that both sides agreed to conclude the cost-sharing talks as early as possible.

Trump’s demand for higher payments from Korea had come shortly before the previous five-year Special Measures Agreement, a burden-sharing agreement between the two countries, was set to expire on Dec. 31, 2018, but the two sides reached an agreement on an interim one-year defense deal on Feb. 10, 2019.

However, a year later, they failed to renew the SMA at the end of the one-year deal so about 4,000 South Korean employees on the base were put on two months unpaid leave from April 2020 as the negotiations stalemate exhausted funds to cover their salaries and wages.

“It was a big mistake to have moved these to one-year deals,” Roehrig said.

“I would expect the administration will work quickly to conclude a burden-sharing agreement, possibly with a modest increase that will be worked out in careful consultation with South Korean officials,” he said.

Among Biden’s picks, Deputy Secretary of Defense Kathleen Hicks highlighted the importance of the strategic values of U.S. alliances at the Feb. 2 confirmation hearing. “I’m very hopeful that President Biden, who has spoken eloquently on this issue, will make good progress in returning strategy to the center of our alliance relations,” Hicks told the Senate Armed Services Committee.