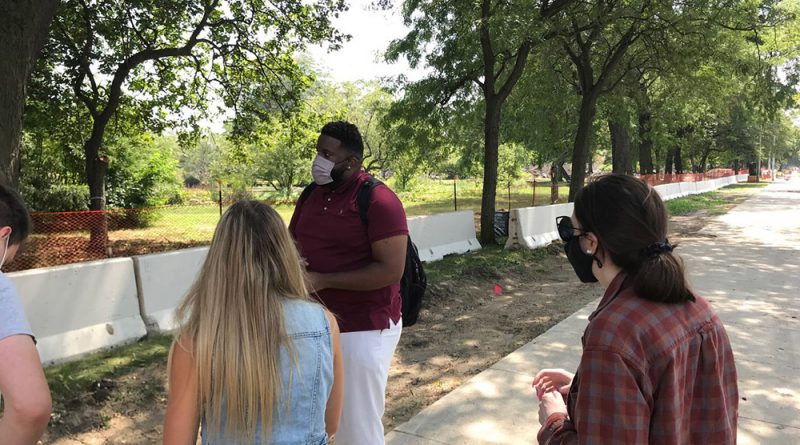 CHICAGO – Even before the Obamas held their official groundbreaking recently, Medill School of Journalism graduate students in the Politics, Policy and Foreign Affairs specialization took an exclusive tour this summer of the historic site where the Obama Presidential Center will rise in Jackson Park on the city’s South Side.

Students in the PPFA Politics Seminar toured the site in late August right after the ground was broken by construction crews preparing the way for the center, while other students in the seminar watched live cellphone video and took part on Zoom. The students participated in a walking tour of the site and received a briefing from Christopher Crater, community engagement associate with the Obama Foundation, which is overseeing the project.

Then, they toured the Jackson Park’s Wooded Island and the Japanese Garden, also known as the Garden of the Phoenix, or the Osaka Garden, on a beautiful stretch of lakefront parkland and lagoons along Lake Michigan.

The tour was part of the Medill Fridays summer and fall quarters programming, resuming after interruptions caused by the COVID-19 pandemic. Specialization directors led neighborhood tours around the city for the students this summer in their MSJ specializations, encouraging them to get more familiar with navigating Chicago.

The long-delayed groundbreaking of the Obama Presidential Center was supposed to happen five years ago, but federal reviews and lawsuits by park preservationists delayed the work for years. Now that courts have cleared the way for the center’s construction on a 19.3-acre site, it is expected to be completed in four years and open in 2025.

The center will commemorate the vision, work and legacy of former President Barack Obama. It is expected to be transformational for the community and will include a museum, a branch of the Chicago Public Library, an athletics and recreation center, a children’s play area and a public forum and plaza. The center will cost an estimated $830 million and generate a projected $3.1 million in economic impact for the community, according to a study done for the Obama Foundation.

Even more personally, the former president and First Lady Michelle Obama selected the site on Chicago’s South Side as a way to give back to a place that shaped them both. He learned community organizing and launched his political career here. She was raised here. This is where they met and married. It was important for the two of them to try to bring investment and opportunity back to the area that was so formative for them, that shaped his early political career and that has suffered strife and neglect over time.

During his tour for Medill students on Aug. 28, Crater spoke of his own difficult experiences growing up in Chicago and why the addition of the presidential center to the Jackson Park area is so important for local Chicagoans and young people–giving them access to a world-class facility, learning opportunities and the revitalization it will bring to the neighborhood.

“This is definitely seen as a life-changing opportunity,” observed Crater as he led the students along the edge of the site where the center will rise and eventually tell the story of the historic two-terms Obama spent in the White House and the broader legacy of America’s first African-American president.

The presidential center also will offer economic development and business opportunities for the community and surrounding neighborhood, educational enrichment for Chicago’s young people and others from around the nation and a historical record of Barack and Michelle Obama’s work in America’s communities. It will also bring hope to many people the neighborhood.

“Even if people can drive by and see a Black construction worker, that gives you hope,” Crater added, noting that a large percentage of the construction jobs here will go to minority owned businesses as an intentional effort to help African-American companies and workers.

Crater, 32, described how the violence so prevalent on Chicago’s South and West Sides has taken so many lives and stolen opportunity from so many young people every year. “For a lot of South Side youths and others in the surrounding community,” he observed, “if they have no activities to be part of, and if they don’t have anything to do, and if they are not engaged in something positive, it just doesn’t end well.”

Jeannie Kopstein, one of the Medill MSJ students on the tour, noted afterwards, “While walking through Jackson Park’s beautiful Japanese Garden and across the grassy fields soon to be the Obama Center construction site, I was reminded of the often overlooked beauty of this South Side neighborhood. I think having a Presidential Center in the very place that the first Black president calls home will be incredible for Chicago’s South Side and bring it the recognition it truly deserves.”

The presidential center is expected to be more a call to the future than just a commemoration of the past, a place to inspire and empower people to learn and work for local and global progress. As Obama put it, “We want this to be a university for activism and social change.”

The exterior of the center will contain a portion of the 2015 speech Obama delivered as president at the Edmund Pettus Bridge in Selma, Alabama, on the 50th anniversary of the Selma to Montgomery civil rights marches. It is a call, especially to the youth of Chicago, but also of America, to take up the baton and continue the struggle for a more perfect union.

“The single most powerful word in our democracy is the word ‘we.’ … That’s what the young people here today and listening all across the country must take away from this day,” Obama declared in Selma. “You are America. Unconstrained by habit and convention. Unencumbered by what is, because you’re ready to seize what ought to be. … And we will not grow weary because we believe in this country’s sacred promise.”

President Joe Biden, who served eight years as Obama’s vice president, sent a prerecorded message to mark the Sept. 28 groundbreaking ceremony, extolling Obama’s campaign mantra of hope and change as more than a slogan, but rather “an ethos, a conviction. And that’s what today represents: It’s not just breaking ground on a new building. It’s breaking ground on the very idea of America as a place of possibilities.”