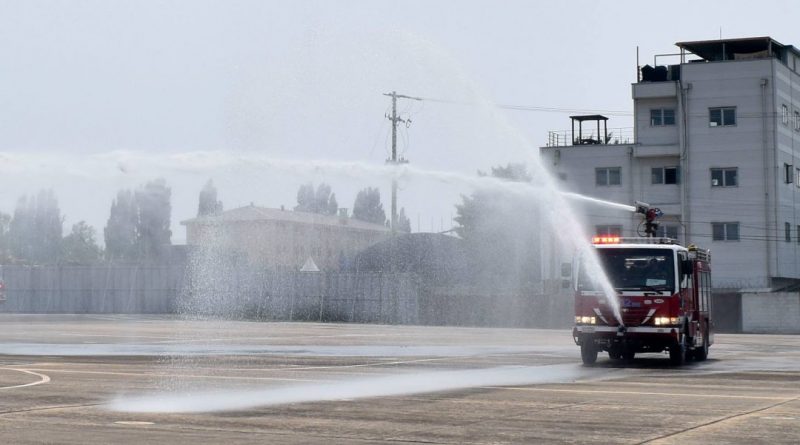 SEOUL, South Korea — A former U.S. Army heliport and runway at Camp Walker in South Korea’s southeastern city of Daegu were found by a South Korean government agency to be contaminated with cancer-causing substances, potentially exposing service members on the base and thousands of residents living nearby to the toxic substances.

The Daegu Citizens’ Coalition for Safety disclosed surface and groundwater contamination at the site, which the Army has given to South Korea, at a Feb. 19 press conference.

The information was based on a field survey of Camp Walker’s 16.5 acres of runway and helipad conducted by the South Korean Ministry of Environment from November 2019 to March 2020. The civic group obtained the internal report after filing an official information disclosure request and revealed a few pages in its press release. The ministry confirmed the report’s findings.

The field survey identified soil contamination by at least eight toxic substances, including arsenic, benzene and cadmium. The highest toxicity of TPH — chemical compounds from crude oil — in soil was recorded at 8,892mg/kg, 17.8 times the safety levels set by the South Korean authorities.

“All these substances found at the base are classified as Group 1 carcinogens, which means the evidence of causing cancer is very strong,” said Dr. Leem Jong-han, dean of the Inha University Graduate School of Public Health. “A prolonged exposure to these carcinogens and consumption of crops grown from the contaminated soils will indisputably increase the risk of cancer or other fatal diseases.”

Camp Walker’s groundwater was also polluted with TPH, phenol, and PFOS/PFOA, which could result in adverse health effects, including cancer and developmental effects to fetuses during pregnancy or to breastfed infants when exposed, according to the Environmental Protection Agency. All of the pollutants exceeded health advisory standards, with the highest TPH toxicity in water recording a whopping 9,724 times the acceptable levels.

The U.S. military has had problems with toxic contaminants at bases around the world. The Pentagon identified more than 400 active installations in the U.S. with a known or suspected release of PFOS/PFOA, which the military has been adding in its firefighting foam since the 1970s. A 2018 Department of Defense report also admitted water contamination at its overseas bases in Belgium, Diego Garcia and Honduras.

“The groundwater contamination is particularly alarming since the toxicants could have poisoned other water sources nearby if Camp Walker’s cancer-causing substances had reached the bedrock,” said Dr. Kim Jungjin, a member of the Daegu Citizens’ Coalition for Safety who exposed the army base’s health hazards. “A comprehensive field survey of the base’s neighborhood is needed to fully assess the risk.”

Some buildings such as the control tower and barracks were also contaminated with asbestos. Breathing in asbestos over long periods can cause severe lung conditions and even cancer, according to Leem.

“I cannot believe the tap water I have been drinking could have deteriorated my health,” said Seo Sunheon, a senior citizen who has been living within a mile of Camp Walker’s helipad. “I am always grateful for our American friends for lending a helping hand to South Koreans in times of war, but it is quite disappointing to hear about the possibility of carcinogens in the water.”

The Camp Walker heliport and runway were handed over to South Korean control in December. U.S. Forces Korea spokesman Col. Lee Peters made it clear that the transfer of Camp Walker’s helipad and parcel of land was completed within the terms of the Status of Forces Agreement and there is no further action required by the U.S. military.

“We value the importance of the U.S. military presence in South Korea for the sake of national security,” Kim said. “But the severe environmental pollution at the Camp Walker site is a separate issue that needs to be addressed to ensure healthy lives for everyone.”

The city of Daegu will establish a panel of experts to effectively clean up the former U.S. Army helipad and runway and allow civilian oversight of the process, according to the press release. The city plans to build a park and a library at the site after the removal of toxic pollutants.