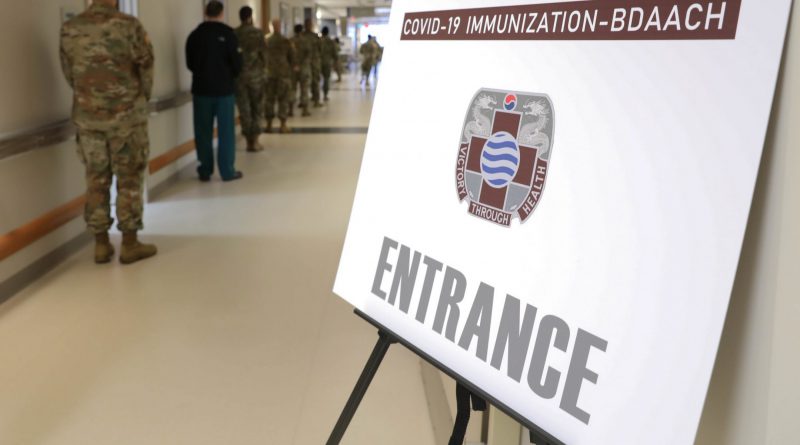 SEOUL – Troops and civilians affiliated with the U.S. Forces Korea were the first to receive the coronavirus vaccine in South Korea, where the vaccination program has not yet been launched due to the government’s belated move to secure vaccines.

Under the vaccination plan, South Korean troops affiliated with the Korean Augmentation to the U.S. Army, better known as KATUSA, as well as South Korean nationals working on USFK bases are eligible to receive doses of COVID-19 vaccine, making them the only South Koreans able to be vaccinated now.

The United States Forces Korea began administering the Moderna COVID-19 vaccine to military and health care workers, first responders and the USFK command team on Dec. 29, according to a USFK statement.

“I strongly encourage all eligible individuals to receive the vaccine,” said Gen. Robert B. “Abe” Abrams, USFK commander. “While the Moderna vaccine is completely voluntary under an Emergency Use Authorization, I want you to make an informed decision for you and your family regarding the vaccine.”

The USFK plans to inoculate all eligible USFK-affiliated community members as production and distribution speed up, according to the commander’s message.

Although the U.S. Food and Drug Administration authorized the Moderna COVID-19 vaccine for emergency use across the United States on Dec. 18, South Korea’s Ministry of Food and Drug Safety has not yet approved a single vaccine.

While the Moderna COVID-19 vaccine is not currently approved in South Korea, the country’s Ministry of Defense decided on Dec. 30 to allow KATUSA soldiers and civilian workers affiliated with the USFK to receive the U.S. military’s vaccines.

According to a report by Dong-A Ilbo, roughly 3,400 KATUSA soldiers and 9,000 South Korean civilians work for the military in South Korea.

Park Ji-man, a South Korean nurse at Brian D. Allgood Army Community Hospital, received his first dose of the Moderna vaccine on Tuesday along with other South Koreans on the base.

“I hope all South Koreans can receive their coronavirus vaccines as soon as possible so that the country can be safer and healthier,” said Park in an interview with the local broadcaster Channel A.