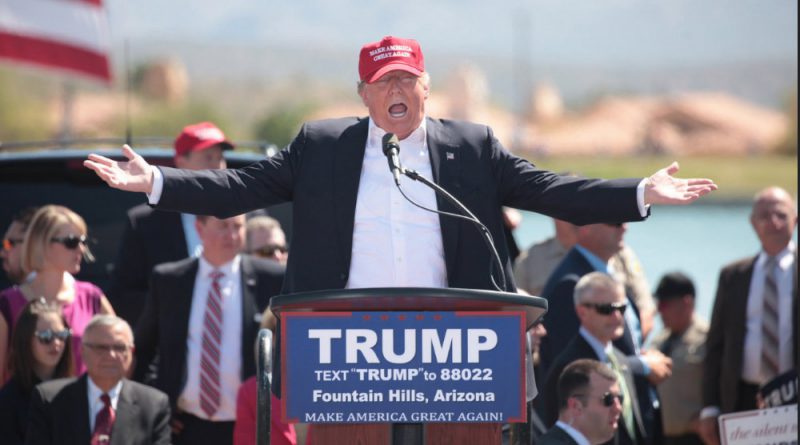 “I believe the person the Republicans have nominated for president cannot do the job,” said former Secretary of State Hillary Clinton in a speech addressing Donald Trump and expressing her concern for the lack of foreign policy experience on the GOP’s presumptive nominee.

Woodburry said it’s too soon to tell if Clinton’s attacks towards the business mogul will affect his credibility. So far, polls demonstrate both candidates are giving one another a run for their money.

In the email, Woodburry explains the proximity in these numbers is because “voters consider factors such as the candidate will not negotiate with terrorist (Clinton 39% vs. Trump 48%) or the candidate would increase military spending (Clinton 40% vs. Trump 49%), as signs of strength.”

In a New York Times article, experts say Trump’s attacks on the press and the judicial system are unconstitutional and ‘could threaten the U.S. rule of Law.’

In one occasion, Trump stopped a press conference to call an ABC political reporter, Tom Llamas, a “sleaze.” He has also commented on federal judge Gonzalo Curiel’s race. Trump says the Mexican-American judge handling the Trump University case has a conflict of interest based on his heritage. But Curiel is an American citizen, born in Indiana, to Mexican parents.

“The public generally does believe it is possible that Donald Trump could become a threat to national security,” said Woodburry.

Concerns for Trump’s rhetoric also have Republicans squirming on his race to the White House. Until recently, the House of Representatives also seemed to be divided on his positions. For a while, House Speaker Paul Ryan was unsure on whether to endorse Trump or not. He was torn between uniting the party and endorsing a candidate who has been described as a national security threat and an ignorant in foreign policy and immigration reform.

“It is my hope the campaign improves its tone as we go forward and it’s all a campaign we can be proud of,” Ryan said in an interview with the Associated Press reassuring the public he would now be voting for Trump.

Many were disappointed after the speaker’s endorsement. The business mogul would be a ‘puppet president,’ said Mark Cuban, owner of Dallas Mavericks in an interview for CNN. “I can go to Hillary’s website and there’s spreadsheets, there’s depth, there’s analysis, there’s details. Go to Donald’s website…he lists issues, but he doesn’t say how he’s going to get there.”

Cuban said Trump is a knowledgeable man when it comes to real estate. He agreed he often goes to Trump with questions involving real estate. But he believes Trump ‘is not as smart as he thinks he is’ to be the leader of the free world, which is why he would be a ‘puppet president.’

Cuban said Trump would have to ask for advice on too many subjects where he is not well versed. This means he would be making decisions and acting based solely on what his closest advisers would recommend.

One plan he would be advised on is the ban on Muslims from entering the U.S. He has considered starting a commission on “radical Islam” headed possibly by former New York City Mayor Rudy Guiliani. Although, Guiliani voted for the business mogul during New York’s April primary, he has since backtracked from fully supporting Trump.

His ban on Muslims “violates the First Amendment. You have no reasonable basis for it,” Giuliani said in a Fox News interview.

President Barack Obama seems to be on the same page as Clinton and experts. “In politics and in life, ignorance is not a virtue,” said President Barack Obama referring to Donald Trump, in a commencement ceremony speech at Rutgers University. “It’s not cool to not know what you’re talking about.”