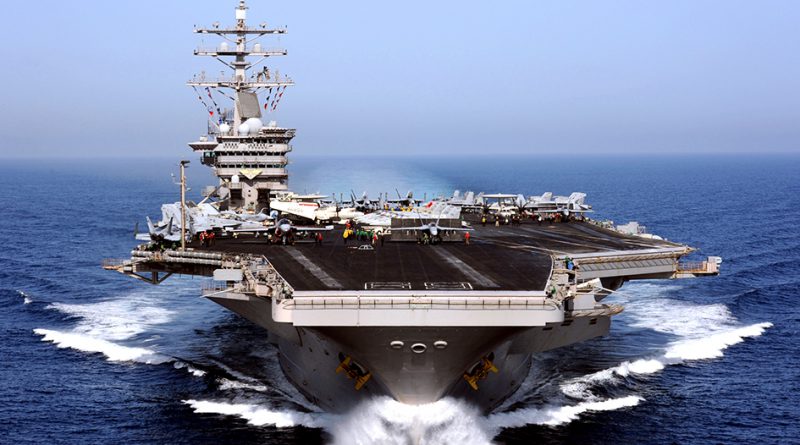 WASHINGTON — Since the beginning of U.S. invasions in Iraq and Afghanistan, the U.S. has had the ability to project power in a relatively unchecked fashion. But some military analysts believe that’s changing now.

To prepare for future threats and war, the Pentagon needs to re-structure the nature of its alliances in Eastern Europe and East Asia, some national security experts say.

“If you look at for example, like the Iraq war – we could basically pull an aircraft carrier right up off the coast of Iraq and just pound Saddam,” said Paul Scharre, director of the technology and national security program at the Center for a New American Security. “And there really wasn’t anything he could do about it. Other countries took note of that, and they’ve been investing in capabilities to keep America at arm’s length.”

Scharre, who worked at the Department of Defense from 2008 to 2013 and was involved in the drafting of the 2012 Defense Strategic Guidance and 2010 Quadrennial Defense Review, believes that by investing in what is referred to in military circles as “anti-access area denial capabilities,” countries like Russia and China have made it more difficult for the U.S. to project power abroad.

Because of these area denial abilities, Scharre believes the Pentagon also need rethink the nature of U.S. alliances in these regions.

“In a future conflict in Europe or Asia, if Russia or China were to try to sort of deny the U.S. access and basing by targeting aircraft carriers, we would really actually need to work with our allies and partners to get not only basing access rights, but also to bolster their capabilities to help defend those bases,” said Scharre. “In the form of things like missile defenses, not only U.S. missile defenses that we would operate, but allied missile defenses that they would operate in Europe, Asia, and in the Gulf.”

Jim Thomas, principal and co-founder at Telemus Group, a defense forecasting and consulting firm, said the expansion of capacities by our adversaries should propel the U.S. to consider arming and assisting paramilitary forces in the Baltic states of Latvia, Lithuania, and Estonia to prepare for potential military aggression from an adversary like Russia.

“They’re all moving in this direction,” said Thomas, who also served as Deputy Assistant Secretary of Defense for Resources and Plans and Acting Deputy Assistant Secretary of Defense for Strategy. “They’re developing local defense league militias. And you know I think that there’s a lot more the United States and its NATO allies could be doing to assist them and to arm them in ways that are most effective.”

Thomas also believes that because of China’s rapidly expanding military might, Japan should replicate China’s approach, but on a different scale. Primarily, it should focus on strengthening its coastal defenses and ability to deny air cover.

Another way to bolster alliances in these regions, Scharre believes, is for the U.S.  to invest in having more resilient bases through the development of hardened aircraft shelters, more dispersed land base, and additional runways.

In Asia, Scharre feels it’s important to strengthen our existing bilateral alliances with countries like Japan, South Korea, Australia, and the Philippines.

Recently, U.S. relationships with these countries have been different. Over the last quarter century, Thomas said, the U.S. has too often encouraged its allies to develop capabilities to assist in U.S. expeditionary warfare efforts abroad.

“What happened though is that this all went too far,” he said. “These countries were reducing their defense spending and what little money they were spending was on these nugatory capabilities that weren’t going to help them in their own defense and they really weren’t making an appreciable contribution to our military efforts. It was just political window dressing.”

Throughout this time, China was building up its military capacity in East Asia, and, in recent years, Russia has become much more aggressive militarily.

“Our allies essentially left themselves more vulnerable in the face of growing threats near to home and there was a need for a rebalance, of moving away from preparations for expeditionary warfare and out of area operations, and a need to get back to focusing on the fundamentals, which are territorial defense, and defense of their sovereign air space and sea approaches.”

Both Thomas and Scharre do believe, however, that despite strategic missteps in the past, the U.S. military is undertaking steps to make American alliances reflect these needs, but caution it will take time.

“We’re moving in this direction,” said Thomas.  “I think that there’s been a sea change in the last couple years. It’s always slow, because you’re changing the pattern of military investment.”