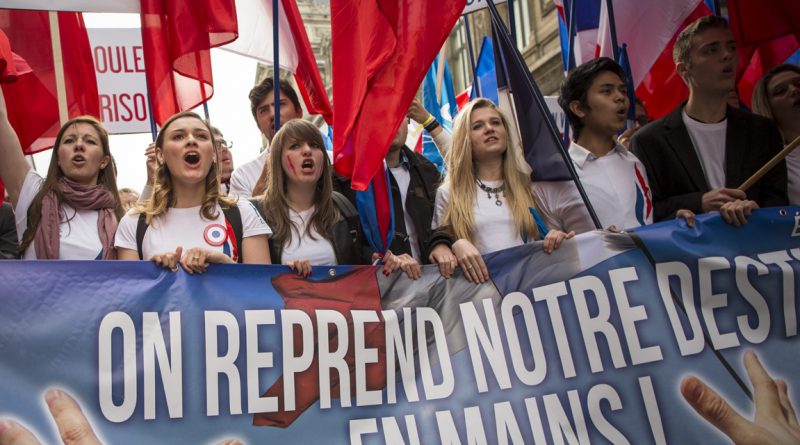 After Front National, France’s largest right-wing populist party, saw its leader Marine Le Pen lose last year’s presidential race by a margin of 66 percent to 34 percent to Emmanuel Macron, a charismatic anti-establishment candidate who formed his own centrist political party, many political experts said neither Le Pen nor the FN had a political future.

But now some analysts said the party’s strategy to reach voters under 40 through both economic and immigration issues could position it well for a rebound in future elections, such as next year’s European Union parliamentary elections.

“Marine Le Pen brought on a team that forced her to take a more left-wing populist message in order to appeal to the youth, since they have such high unemployment,” said Charlotte Cavaillé, a political researcher and assistant professor at Georgetown University. “That meant taking positions such as ensuring to the youth that the welfare state would remain well-funded.”

Cavaillé said that while the shift to the economic left resonated with young voters, it was not without consequences. The shift caused fractures within the party and angered the “old guard,” including Florian Philippot, Marine Le Pen’s former strategic director, who left the party in September .

But polling data among young voters likely reassured Le Pen that her strategy is working.

In the 2017 election, Le Pen performed better with younger voters than older voters. She won 34 percent of the vote of 18-24 year-olds, slightly above her total share across all voters. She won only 27 percent of the over-65 vote. This stood in sharp contrast with other populist movements such as Donald Trump’s presidential campaign in the United States and Britain’s referendum to leave the EU, in which older voters overwhelmingly backed the populists and younger voters overwhelmingly opposed them, Cavaillé noted.

However, Garett Martin, a professor at American University’s School of International Service, said that Macron could be the key to keeping younger voters away from the FN and ensuring the party remains weakened.

“The FN’s success to some degree depends on the success of Macron. Both Macron and Le Pen positioned themselves as new figures,” he said. “The FN appeals to the youth because of their high unemployment. If Macron can keep his energy and dynamism and address unemployment, that could be crucial.”

For some young FN supporters, the influx of immigrants and refugees is the driving cause, perhaps even more than economics. Gaëtan Dussausaye, leader of the FN’s youth faction, said that inaction from mainstream parties on stricter immigration drove him to the FN. On social media, he has repeatedly criticized France’s policy of welcoming refugees, many of whom are from Muslim countries.

“At Calais, Macron meets with aid associations for refugees—and for so-called ‘refugees’,” he tweeted in January. “In terms of immigration, with Macron it’s always more lax!”

Cavaillé said many young people felt that the large number of immigrants and refugees were changing France for the worse in an intangible way, which could continually push them toward the FN.

“The younger generation is reacting more to the second generation of immigrants,” she said. “They have a sense that something about France is disappearing and it’s because of Islam—because of Muslims.”

Perhaps in response to those concerns, Macron has taken steps to curb the influx of refugees into France, which received a record 100,000 applications from asylum seekers in 2017. Last month he approved measures to speed up asylum procedures and cut the time for rejected asylum seekers to appeal the decision. Nonetheless, analysts said Macron generally remains much more open to immigration than the FN.

“The end of anti-immigration logic, as seen in the U.S., is a closed country,” said Mark Hunter, an author who has written about the FN. “Macron sees the outside world as a market and an alliance, not as an enemy.”

That belief in an open society could do little to assuage the social concerns of young French voters in future elections.

“In terms of what motivates voters, the older voters are galvanized by the economic,” said Martin. “For younger voters, ultimately they just care more about things like values and identity.”