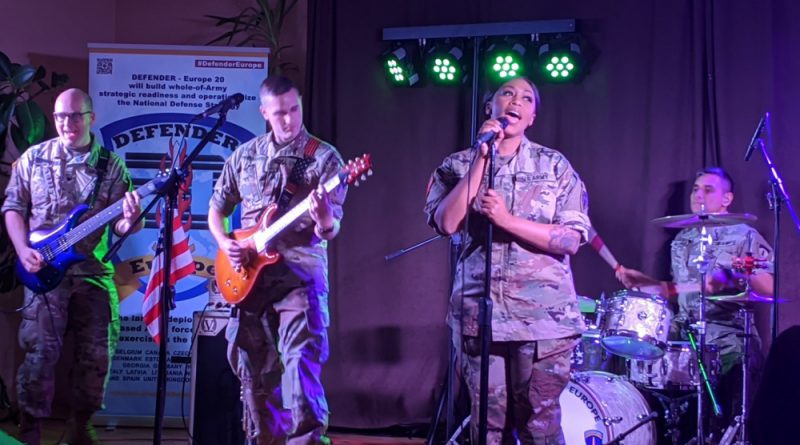 WASHINGTON— A concert tour las month has packed venues across Lithuania, Poland and Germany, enticing crowds to come down and rock out. It’s not Lady Gaga or Harry Styles, but rather an unexpected headliner: the U.S. Army Europe Rock Band.

U.S. Army Europe hosted the free, 11-city rock concert tour as part of its Defender-20 Europe Goodwill Outreach Tour from Feb. 28 to March 12. The tour was an effort to “build trust and confidence among the civilian populations” that will be affected by the exercises, according to Michael Huth, chief of the U.S. Army Europe’s Outreach Division. As soldiers and army vehicles began to appear in various European towns, Huth wants the population to understand their presence.

“As with anything, things that we don’t understand can take away comfort,” he said. “Fear is based on things we don’t understand. When you’re dealing with military movements of armored vehicles and large colonies of convoys, we don’t want people to be afraid of why we are there.”

Defender-20 Europe refers to the deployment of American-based forces and equipment to Europe for various exercises. Over 20,000 pieces of military equipment were moved to the continent for the exercises, testing the army’s capability to rapidly transport a combat-credible force across the Atlantic Ocean.

Outreach is important to dispel distrust and unease during these types of exercises, especially with the historical context of the area, the military believes.

“You can go to former East Germany and sometimes old people—if they’re not informed beforehand that there’s going to be trains coming by with tanks on them—they might think ‘Oh my gosh, is this World War III around the corner?’” Huth said.

The first arrival of vehicles and equipment was on Feb. 21 at the Port of Bremerhaven in Germany. One of the first major movements occurred in late February, when five convoys with approximately 20 vehicles each departed from ports in Antwerp, Belgium and Bremerhaven.

U.S. Army Europe used existing rail systems to transport equipment through Lithuania, Poland and Germany, and many of the convoys on the roads occurred at night to minimize civilian disruption. Additionally, the transportation efforts took into consideration environmental risks by using high quality gasoline and ensuring equipment cleaning to Department of Agriculture standards. If there is an environmental mishap, the army has devised a system for civilians to report a claim.

At the outreach concerts, Army officials imparted this information to the audience in between sets of fan-favorite rock songs from artists like Elton John and Justin Timberlake. The U.S. Army Europe Rock band is composed of members of the U.S. Army Europe Band, which performs over 200 missions – performances, as civilians would say —  per year. U.S Army Europe constantly provides outreach to the communities it impacts, but this was the first targeted music tour.

“Not only is it rock and roll music, but it’s also sharing American culture with the society, coupled together with this crucial messaging,” Huth said.

U.S. Army Staff Sgt. Rob Lefevre, the noncommissioned officer in charge of the band as well as its bass player, said he never thought he’d be in a former Eastern Bloc country rocking out. He said the tour was a novel and effective use of soft power and diplomacy.

“It’s been one of the best uses of us in a long time,” he said. Audiences expected a U.S. Army band to be rigid and serious, he said, but were pleasantly surprised when they put on a “really good, VH1 style” performance.

“Once we gave the audience permission to have fun, they had fun,” he said.

The performances were popular, drawing close to 700 people at some venues and always filling seats to at least 80% capacity, according to Huth. A video posted on March 11 to the Facebook page for the U.S. Army Europe Rock Band shows hundreds of concert-goers in Potsdam, Germany waving their phone flashlights back and forth to the music. Another shows people dancing close at the foot of the stage in Powidz, Poland.

“Inhabitants of Powidz learned important information about Defender-20 that they knew nothing about before,” said Robert Czechorowski, director of the Powidz Cultural House. “It was a great concert that everyone liked. I look forward to further joint initiatives with the U.S. Army”

Huth said that spreading accurate information about the mission of Defender-20 Europe was “critical” for national security because it builds confidence between citizens and soldiers.

“If you don’t have the trust and confidence of the people in where you’re exercising and where you need to help…and if you don’t engage with them before a possible crisis, then you’re coming in and you’re kind of foreign to them,” he said. “If they know who you are, if they’ve met you before, if they see us doing things like sending out our band, if they see soldiers behaving correctly in public, they get used to it. So it’s nothing new when you come.”

That goodwill between the military and civilians, Huth said, is important for the success of the overall mission.

“I don’t think you can overstate the importance of these kinds of engagements,” he said.

At the end of the day, there are only a few experiences that can transcend language or cultural obstacles. Music, Lefevre said, is one of them.