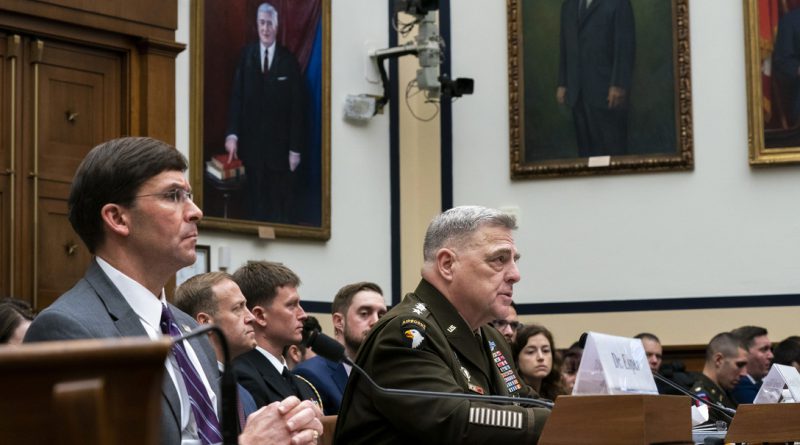 WASHINGTON — The Trump administration is requesting $200 million in aid to vetted Syrian opposition forces in fiscal year 2021, the same as the previous year. But with the president’s decision to withdraw U.S. troops from Syria, the proposed budget without adjustments to financial assistance may leave those former allies to fend for themselves.

There is a concern that with a diminished physical presence, the future role of America in helping its Syrian partners to fulfill mutual objectives like fighting ISIS, as well as the more individualized political objective in the region, is tenuous at best.

At a congressional hearing in February, Secretary of Defense Mark Esper said the current mission remains working alongside Syrian Democratic Forces (SDF) to defeat ISIS in the eastern portion of Syria.

Kurdish armed groups dominate the SDF. Yet, Esper said he did not “see any likelihood” U.S. troops would be back along the Turkish-Syrian border where Americans had fought with former Kurdish partners.

The administration’s strategic choices to not increase aid despite withdrawing American forces revealed in the budget request released in February expose the unstable futures of long-held partnerships– particularly in regard to Syrian Kurdish partners that have played an integral role in helping the U.S. in its fight against the Islamic State.

Between fiscal 2016 and 2019, the U.S. government allocated $1.5 billion for training and equipping the vetted Syrian opposition (VSO) inside Syria, which included Kurdish armed groups. According to data from the Office of Management and Budget and the Congressional Budget Office, the United States has increased its spending for national defense discretionary programs, which includes security assistance, from $287 billion in 2001 to an estimated $704.8 billion.

Security assistance to foreign partners has traditionally been regarded as a strong benchmark to assess the degree of U.S. political support for a particular ally or partner. Yet, under the Trump administration, this method of measurement has become somewhat unreliable.

“In my mind, it’s not a positive trajectory with the Trump administration at least,” says Elias Yousif, assessing the U.S. partnership with the Kurds. Yousif, an arms trade and international security researcher at Security Assistance Monitor, tracks U.S. security aid and arms sales around the world and works with the organization to make the data publicly available online.

Although the U.S. has continued to work with Syrian Kurds in counter-ISIS operations, most notably in the operation that killed Abu Bakr al-Baghdadi, the troop withdrawal decision fractured SDF confidence in the partnership. Continuing to decrease financial support on top of a troop withdrawal could be taken as a lack of U.S. resolve to continue partnering, which in turn could trigger U.S. partners to make up the loss by making other alliances.

A range of foreign states are power players in the region and have intervened in Syria, including pro-Syrian government forces like Lebanese Hezbollah, Iran and Russia and even Turkish military forces in northern Syria that are part of a broader campaign targeting Kurdish fighters.

“It would mean something significant if the U.S is providing arms and weapons to a group that was beginning to align itself more closely with Russia and the Syrian government,” Yousif said of the Kurds’ potential to seeks assistance from other players like Russia to offset the disappearing American presence in the region.

Melissa Dalton, director of the Cooperative Defense Project at the Center for Strategic and International Studies, said the U.S. still has interests that would merit continuing meaningful security assistance to its Syrian partners.

According to Dalton, one reason is to help protect any remaining U.S. forces in Syria who are “totally reliant” on the SDF to provide access and logistics where American troops still maintain a presence in small numbers. Dalton also counted ongoing counterterrorism efforts against ISIS and humanitarian interests as reasons why the U.S. has kept its commitment to financial assistance and why Congress has continued to provide for it.

While funding for Syrian local security forces appears solid for this year and next, the resolve of the U.S. to continue providing meaningful assistance and reliable partnership in the future remains the uncertain X-Factor, the experts said.

“I do think we will reach a breakpoint at some point with our partners there,” Dalton said.